YouTube have recently announced a new initiative to offer subscriptions to users to watch content, in return for viewing YouTube ad-free – akin to their music subscription offer ‘Music Key’. This was announced in a letter to all YouTube content creators, and was widely publicised in the media. But will this new scheme benefit the content creator, or undermine the already unreliable revenues YouTube creates?

Replacing adverts with subscriptions is nothing new: Spotify notably has offered the option to go ad-free since their public launch back in 2008, so it seems no surprise that YouTube are offering such a deal to their users.

Also, as many people use YouTube as an alternative music player – essentially queuing up playlists of music videos and using them as a way of listening over using a music streaming service or radio – it seems to make sense that having a system akin to Spotify would be the perfect solution to listening interruption-free. 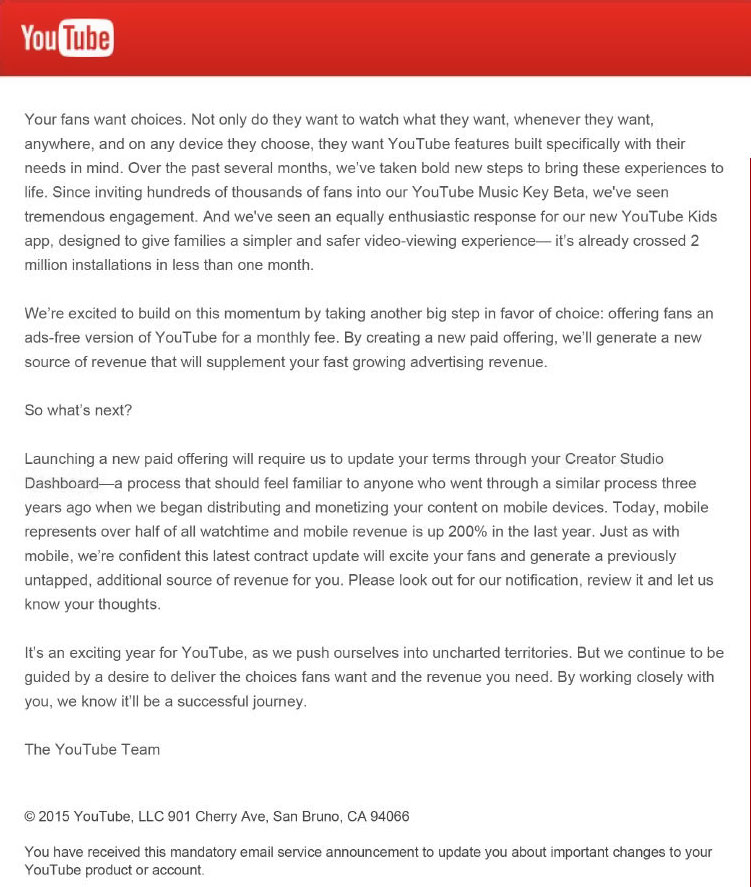 The letter from YouTube announcing to Creators the subscription plan

Whilst music videos may be the bread-and-butter of advertising revenue for YouTube, and so Music Key is a logical idea, the question some in the indie film industry wonder is what effect this will have on money coming into the service with a subscription-based YouTube, and more importantly to the content creators.

YouTube have repeatedly assured creators that this method is positive; there will be more money available to creators and there will be assured revenue, as there will be a fixed income for batches of views unlike the current mechanism of advertisers paying every time an advert s shown (which is not perfect due to a combination of adverts not always being shown before every view, some advertisers only paying per clickthrough, and a percentage of users using advert-blocking software such as AdBlock Plus).

This could likely mean that for content creators like ourselves, whose annual revenues from YouTube are barely in the double digits, could see a significant increase in the amount of money raised.

However, for some creators they may see their revenues decline as a result of this move – unsurprisingly, the revenues created for 100 advert streams is expected to be less than the revenue return for 100 views from subscribers. In addition, users repeatedly viewing the content on repeat (for instance, someone who really enjoys the musical stylings of Ylvis’ The Fox) only provide a fixed amount of content to the content creator per day, potentially less than someone seeing an advert every time.

Often schemes that YouTube introduce that claim to be for the benefit of the creators don’t work to expectations (such as their switch from view-based video ranking to engagement-based ranking, which caused a massive drop in views for many content larger creators as subscribers and searchers no longer saw some of the more popular content).

Only time will tell whether this scheme will be beneficial to creators. On the one hand, there might be a positive effect on revenue. On the other, it may turn out that the only one who benefits from this new deal is YouTube themselves.