← Carnival of Sorrows News – Closing in on a Final Draft

Okay, so Chrissey who does the updates is in the middle of buying a house and moving, which is why the updates have been a little sparse of late. Rest assured that things are still progressing a pace behind the scenes. Let’s bring you up to date on everything that’s been happening in the last couple of months…

Animation let down… activate Plan B!

While we were anxiously waiting for feedback on the latest edit of the film, we received some bad news.

The animator who was working on the animated segment of the film has dropped out. Unfortunately we’ve been the victims of someone saying they’re doing something and stringing us along with promises, only to disappear off the face of the earth when it got close to deadline time.

Unfortunately this has left us back at square one with regards the animation.

It’s one of the perils of indie film making, and one that happens all too often. On the up side, we have a back up plan which we’re already putting into action. We’ll keep you posted.

Feedback began to trickle in and most of it was positive. Where there were constructive points of criticism we’ve tweaked things here and there. An almost complete version of the film now exists!

We’re not calling this a picture locked version just yet but focus has now shifted from the basic picture editing to the more involved post production work of visual effects, title graphics and of course sound and music.

We’ve had some first samples back from composer Hans Hess and they’re very impressive (if we do say so ourselves). In the next update we hope to bring you a sample “work in progress” clip.

W’d hoped to be a little further along with the score by this point, but having heard some of what Hans is producing we’re glad he’s taking his time over it and not rushing to produce something as fast as possible. At the end of the day we want it to be the best it can be.

Sound editing a little behind schedule

As we mentioned in previous updates the post production on sound was seriously delayed by technical issues which were resolved earlier in the summer. Unfortunately this delay has ultimately resulted in the sound post production clashing with personal commitments which, had we not been delayed, wouldn’t have been a problem. (Another typical indie film making pitfall that we have sadly fallen victim to)Rolex Replica
Replica Rolex
Fake Rolex Watches For Sale

Nevertheless progress is steady and, better yet, our investment in some new technology has reduced our need to re-record any problem dialogue to only a few lines here and there.

So when will it be finished?

At this point, completion in 2016 is no longer possible. Live recording for elements of the sound track won’t be until late November, and sound post production looks likely to run on a little bit due to personal commitments. We’re also keen to test screen the film as soon as a final draft is complete, and we may want to make changes based on the feedback from the test screening before we exhibit the film more generally.

However, we are on track for completion early in 2017, just in time for the 2017 festival season.

What else is new?

Something else we’ve been working on is compiling the DVDs for the other Gabriel Cushing titles ready to fulfil the Kickstarter rewards and for use as part of the wider promotion of Gabriel Cushing in the run up to the release of Carnival.

Take a look cover for Gabriel’s first outing “Terror of the Killer Carnivorous Coat.” The general cover layout will be used for all the titles in the collection, for the Kickstarter reward and promotional
editions. 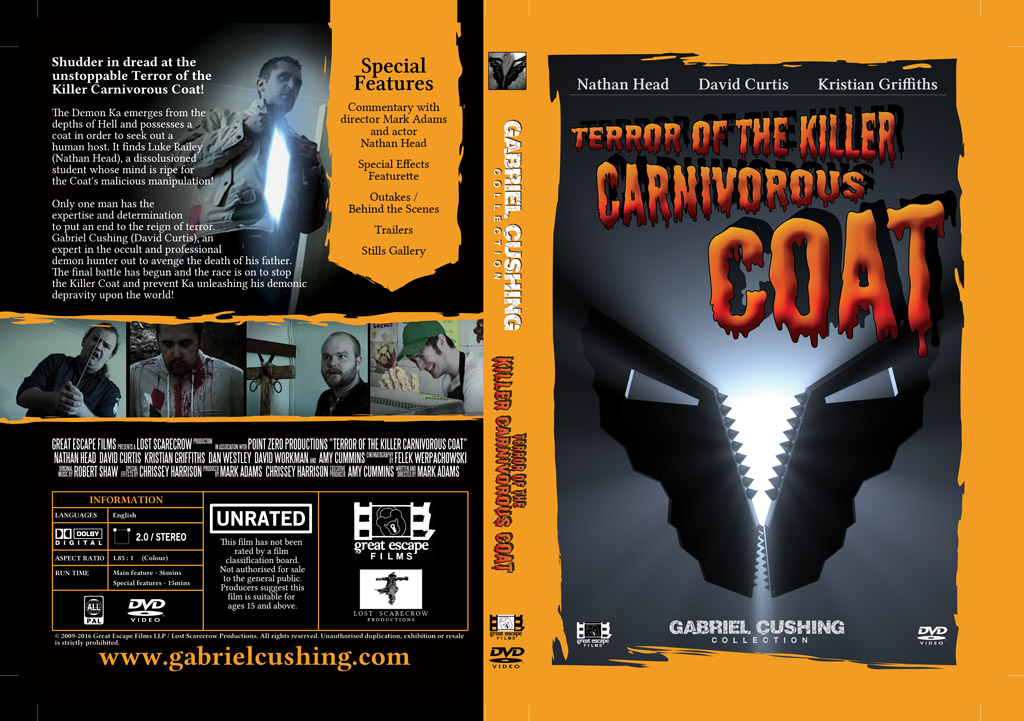