Is cinema out of film?

David Curtis gives his thoughts on the shift towards Digital Cinema.

David is a former film projectionist, and the creator of short films “Rollin’” and “Projector Death Rattle”. 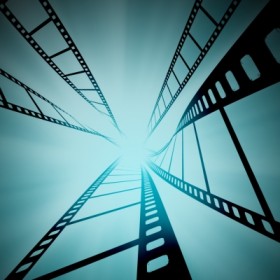 At the end of 2012, David was made all but redundant when the multiplex he worked at moved entirely over to digital projection. The craft he had honed for several years, and that of generations before him, was suddenly made irrelevant.

His cinema is one of many no longer can show movies on celluloid film. The industry, in a bid to lower costs, improve picture quality and reduce piracy, have replaced canisters of static images and printed sound with hard drives of 1s and 0s. Nearly 70% of all cinema screens in the world now project digitally, spurred on by the influx of 3D films and the end of the release of new films on 35mm in the US.

In this article written for The Great Escape, David tells us his memories of working in cinema and his feelings during this massive shift in film presentation.

Discworld. That’s what I liked to call it.  A room, a contained universe of circular worlds that magically spin around in the dark, tell their stories and then sleep and then start again for a new audience. It’s also the series of books that I most associate with the four years that I spent as a projectionist in a twelve screen multiplex cinema.

I fell in love with video tapes from an early age, not DVDs, the winding is something that I deeply connected with as a film as a Motion Picture.  So being surrounded by the loud susurrus of a dozen projectors playing films in discord was a glorious feeling. Being part of the last generation of projectionists before the arrival of the digital revolution at my site was a nerve-wracking honour.  There were good times and bad times but mostly it was the joy of being connected to a tradition over a hundred years old.

Even before I knew what I was doing I was fascinated by the things I did not have names for yet. The unravelling of the celluloid off the platter through the feeder unit, winding through the rollers, across and then down into the projector head, the blaze of light as pictures shot through the air and then onto the screen, then rushed journey back down the rollers and then onto the next platter.  The voyage of a picture from projector to screen does no longer do this. A bulb is ignited and the picture is there.  Which would seem like the very essence of magic, wouldn’t it? I can’t see how it works. There’s no image inside I can peer in and go, “Ah ha!”.

Every single screen in the circuit, countrywide, where I previously worked is now digital. The content is now all within the control of the managers’ office, linked to a big central server in projection booth that divvies up the films between all of the projectors.  The films are paid the same amount of attention as any general task, relied upon by staff to monitor as managers are often too busy to be up in the booth. Sure, the digital films all offer stunning picture quality and sound but films are human, even when they are all computer generated, and the absence of the man in the porthole behind the audience will always break my heart whenever I turn my head in a packed cinema. And yes, I will still go to see films and enjoy them just as before, nothing can dampen my enthusiasm for the medium.

Thanks to David Curtis for this article. You can read more from Dave at his Tumblr, Adventures of a Film Geek. Also, you can watch his two short films about the death of film here: