Monthly Mention is our monthly featurette where we give a shout out to a bunch of great stuff and projects in the world of indie films, fiction and comics. It might be new, it might have been around for a while, but it is all cool.

Here’s some stuff we’ve come across recently that we think you should check out:

The Hellequin Chronicles: Prison Of Hope 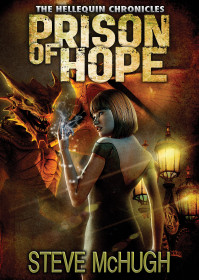 Steve McHugh is a British writer specialising in supernatural fantasy, and is creator of long-running series ‘The Hellequin Chronicles’.

The latest book in the series, Prison Of Hope, was released last month and is already getting rave reviews on Amazon.

Long ago, Olympian gods imprisoned the demon Pandora in a human – Hope – creating a creature whose only purpose was chaos and death. Remorseful, the gods locked Pandora away in Tartarus, ruled by Hades.

Now, centuries later, Pandora escapes. Nate Garrett, 1600-year-old sorcerer, is sent to recapture her and discovers her plan to disrupt the 1936 Berlin Olympic Games, killing thousands in a misplaced quest for vengeance.

Fast forward to modern-day Berlin, where Nate has agreed to act as guardian on a school trip to Germany to visit Hades at the entrance to Tartarus. When Titan King Cronus becomes the second ever to escape Tartarus, Nate is forced to track him down and bring him back, to avert a civil war between those who would use his escape to gain power.

You can read the prologue and first chapter on Steve’s site, and purchase on Amazon now.

He is well-known for his posters extolling the virtues of careful airship piloting, sew-on patches depicting the wearer’s allegiances with the mad sciences, and trying to conscript many into the First Tea Company by way of his travelling museum.

However, his whole empire started off with a simple comic: a gimp suit-wearing hero named Fetishman, along with his sidekick Lactose-Intolerant Boy, attempt to thwart the evil forces of Baron von Wagner, deal with various neer-do-wells and receive copious amounts of ‘punishment’ from Mistress Domination.

It’s been 13 years since the first part of Fetishman was launched, and to celebrate Dr Geof is creating the ultimate compendium of his exploits named… The Fetishman Filthology, over 500 pages chronicling the early history of the latex-clad crusader.

Currently funding on Kickstarter, which finishes on the 31st of May!

Check out the Kickstarter now! 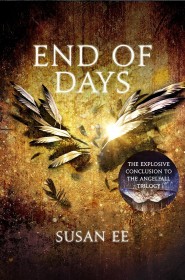 Susan Ee is a Young-Adult Fantasy author who, much like Steve, found fame through self-publishing and e-books.

Her first major series, Penryn and the End of Days, is coming to a conclusion this month with her book ‘End Of Days’.

After a daring escape from the angels, Penryn and Raffe are on the run. They’re both desperate to find a doctor who can reverse the twisted changes inflicted by the angels on Raffe and Penryn’s sister. As they set off in search of answers, a startling revelation about Raffe’s past unleashes dark forces that threaten them all.

You can read chapters and samples of the series on her website, SusanEe.com, and can pre-order the book on Amazon.

Cirque Du Mort is a brand new gothic comic series created by Anastasia Catris, a freelance illustrator from Wales whose talents are constantly in demand. Her book ‘SuBo’s Cat’ – about the exploits of unlikely star Susan Boyle’s pampered pet – was a massive hit having been picked up by HarperCollins for publication. She has also produced illustration for some big names in comics such as DC Comics and IDW, and is a regular on the indie comic book circuit.

Her latest project, Cirque Du Mort, tells gruesome tales about the cast of a haunted circus – each story being told from the perspective of one of the cursed troupe who are treading the boards for one reason or another.

The book finally went to the printers this month, so check out Anastasia’s website and Facebook page to find out how you can secure your own copy!

Dawn After Dark: Kiss Me Deadly 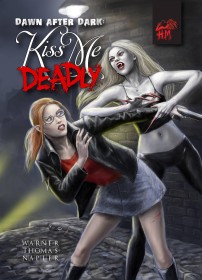 Collecting the original issues, and featuring a wealth of bonus artwork, this trade paperback features the début storyline of “Dawn After Dark”, the continuing chronicles of Dawn Keenan, Dublin’s premier vampire hunter.

You can find out more about Dawn After Dark on Hellbound Media’s website, or check out the comic book preview right here on TGE. 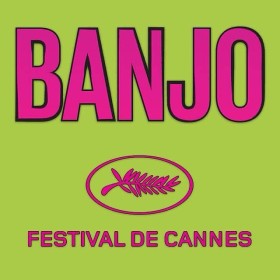 We can’t have a Monthly Mention post without mentioning that we’re all excited that Banjo, a film we helped out on and starring several TGE cohorts and friends, is on its way to the Cannes Film Market next week!

Banjo follows the story of Peltzer Arbuckle, a bullied office worker humiliated daily by his fellow colleagues and cheating spouse.

When news about an embarrassing bedroom accident makes it’s way around the workplace, Peltzer decides to put up with his torment no longer, and conjures up his childhood imaginary friend “Ronnie” through the use of a Ouija board.

Peltzer’s world is soon turned upside down, as Ronnie attempts to manipulate him, to exact revenge on his tormenting co-workers in the most gruesome fashion.

As Ronnie starts wreaking havoc and ruining Peltzer’s life and relationships, Peltzer soon finds that the genie is out of the bottle, and no longer able to control his imaginary friend in this twisted tale of romance and revenge.

Liam Regan, it’s dedicated and amazing director, is Troma Entertainment alumni – and the film itself is a love-letter to the fun, gruesome and stylish genre that put that company on the map. In fact, it’s no surprise to see some familiar Troma and indie horror names on the bill.

Massive, massive congratulations to Liam Regan and the Cincest Films team for getting Banjo to Cannes. We can’t wait to see it!

That’s all for this month’s mentions, but check out Coming Up In May 2015 to find out what’s going on for the rest of this month on TGE!