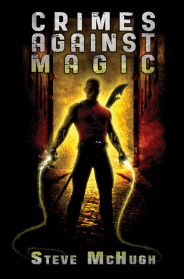 Set in modern day London but with a host of historical and fantasy characters, the story creates a world in which the ancient and the modern don’t seem so far removed.

“It’s been almost ten years since Nathan Garrett woke on a cold warehouse floor with nothing but a gun, a sword, and no idea of who he was or how he got there. His only clue … a piece of paper with his name on it. Since then, he’s discovered he’s a powerful sorcerer and has used his abilities to work as a thief for hire. But he’s never stopped hunting for his true identity, and those who erased his memory have never stopped hunting for him.”

Read an extended review and excerpt from the book on Chrissey’s Great Escape.

Fiction editor Chrissey poses the questions and we invite you to get involved for a chance to win a copy of Crimes Against Magic (see below for details), so let’s get to it…

Chrissey: Many say that a writer’s first novel tends to reflect them as a person. Is there a lot of yourself in Nathan, the hero of your story?

Steve McHugh: We’re both about the same height. We’re both protective of our family and friends, and we’re both a little bit too much of a smart-ass for our own good, but that’s probably about it. I probably bite my tongue a lot more than Nate ever would. He’s sat around in my head for years, so he was bound to share a few traits.  Fortunately, none of the less pleasant aspects of his personality transferred back to me. I hope not anyway.

CH: The cast of characters in Crimes Against Magic is very diverse. Which character is your favourite?

SM: Other than Nathan, probably Dani. She’s the sixteen year old daughter of his neighbour and someone who looks up to Nate as a sort of refuge from the crap she deals with at home. She plays a pretty big part in the book and her dynamic with Nathan was a lot of fun to write.

CH: Was it hard to decide what kinds of fantasy creatures and abilities to include in the world you’ve created, and which kinds to leave out?

SM: In some ways, yes. I knew that I wanted werewolves, a few vampires and some sorcerers, but I wasn’t sure which others to put in. I created a few creatures of my own and wanted to use them too, so I kept the over all number of species as small as possible so as not to overwhelm.

I left out a Troll, a few Elementals and werelions. Oh, and originally there were Necromancers in the story too. Most of those will make it into the books after CAM. So, I still get to use them, thankfully. Especially the Necromancer, who was my favourite character that I had to cut.

CH: The main story takes place in present day England, but there is also a side plot set in Medieval France. How did you come up with this format?

SM: Do you remember the Highlander TV show? Every episode it would flashback to some point in Duncan’s life. I always loved that, I loved learning more about this centuries old person and seeing how he acted in those times gone past.

The idea was the same with Nathan. He’s 1600 years old, so I had loads of stuff that he’d seen and lived through and wanted to use some of it in flashbacks. Fifteenth century France was because I’d seen a programme about Agincourt and was interested in the time period. After a little research, I settled on it being around the destruction at Soissons and went from there.

CH: Do you have a favourite scene from the book?

SM: I have loads: The first time you meet Dani. The scene in the pub with Nathan and a woman I won’t spoil. And there’s a flashback part I’m very proud of which takes place next to a lake.

But probably my favourite is the scene near the end. It’s one long fight between Nate and a group of people and ends with a one on one brawl. It’s fast and brutal and ends in an incredibly vicious way.  I love that scene. I love Nate’s line before it starts, and I love how it ends.

CH: Crimes Against Magic pulls together a lot of world mythology and action in different time periods. Did you need to do a lot of research to get everything just right?

SM: For the flashback stuff, I did, yeah. I had to make sure that the language was as close as I could get it as possible. That it didn’t feel modern and that people used words they would have used. I look a few liberties with language here and there, but for the most part it’s fairly accurate.

The mythology thing was a whole different story. I have dozens of books on myths. Finding the right characters to put in was easy, finding the best way to have them interact, and how the myth and reality might differ was much more time consuming. Fun though.

CH: Can we expect to see Nathan return in future books?

SM: Oh yes. Book two: Born Of Hatred will hopefully be out before too long (probably 6 months at the latest) and then I’ve got book three: With Silent Screams. I have about another dozen after that all written plotted.  I just have to write them.

CH: Lots of writers are choosing to self-publish these days. What made you choose the self-publishing route instead of taking your book to a publisher?

SM: I did originally go the traditional route. I sent out queries and synopsis and got back a lot of form rejections, a few ‘thanks but no thanks’ and a few more ‘we like it, but it’s not for us at this moment’.

To cut a very long answer short, I just decided to try it for myself. To have the control over what I did. I figured if I didn’t do it, that I would regret at least not trying. So here we are. One day I may write something that I’ll try with agents, but at the moment I’m happy with Indie-publishing.

CH: What advice would you give to other writers working on their first novel?

SM: Join a crit group. That’s basically the best advice any writer can be given. Learn your craft by critiquing others and having yours critiqued. Accept any constructive criticism with grace and a thank you. These things will hold you in good stead for your writing career.

Oh and it’s also helps to have as many friends in the industry as possible. Their knowledge is invaluable to anyone starting out.

A good crit group will supply these things in spades.

We’d like to say a big thank you to Steve for taking the time to share his thoughts with us. We’re super excited about Crimes Against Magic, and we hope you’ll all go and get yourself a copy. And, of course, you can find out more about Steve’s books on his blog.

Crimes Against Magic is available to download from Amazon right now.

Closing date for entries is Sunday 13th May and the winner will be announced on Monday 14th May.