← Meet the people behind the site
Chrissey’s Writing Tips #2 → 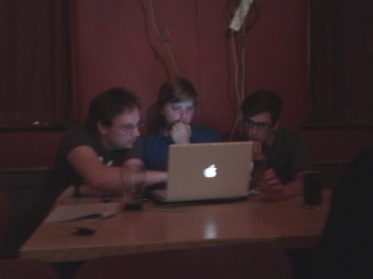 Rich and I had the pleasure of attending an animation showcase hosted by Bristol based group CineMe yesterday evening. Marley Hamilton, one of the stars of our upcoming web series, joined us for the event at Bristol’s Tobacco Factory theatre and bar.

James Ewen and his colleagues at CineMe had compiled a two hour showcase of short animated films of outstanding quality, including pieces by:

The Great Escape will be showing some of our films at one of CineMe’s upcoming showcase events, so stay tuned for a chance to see some of our work on the big screen.

In the meantime, do check out CineMe’s other upcoming events, including an editing workshop with Bafta Award winning editor, Don Fairservice, which some of The Great Escape crew will be attending. They will be launching their new website at the end of the month, where you can find lots of exciting independent videos to watch.

A big thank you to CineMe for an enjoyable evening.