Here you’ll find details of our current and upcoming production openings, including both casting and opportunities for crew to get involved behind the scenes.

Actors, please include links to any websites or profile pages where we can see a picture and/or examples of your work, and a phone number so we can contact you.

Please note – All cast and crew applicants must be able to speak English.

Gabriel Cushing at the Carnival of Sorrows – Audition Evening.

Parking is available in the Folk Hall car park opposite.
You do not need to book in advance but doing so will help us reduce waiting times. Please feel free to contact us for further information.

Please see below for more information about the production and roles available. 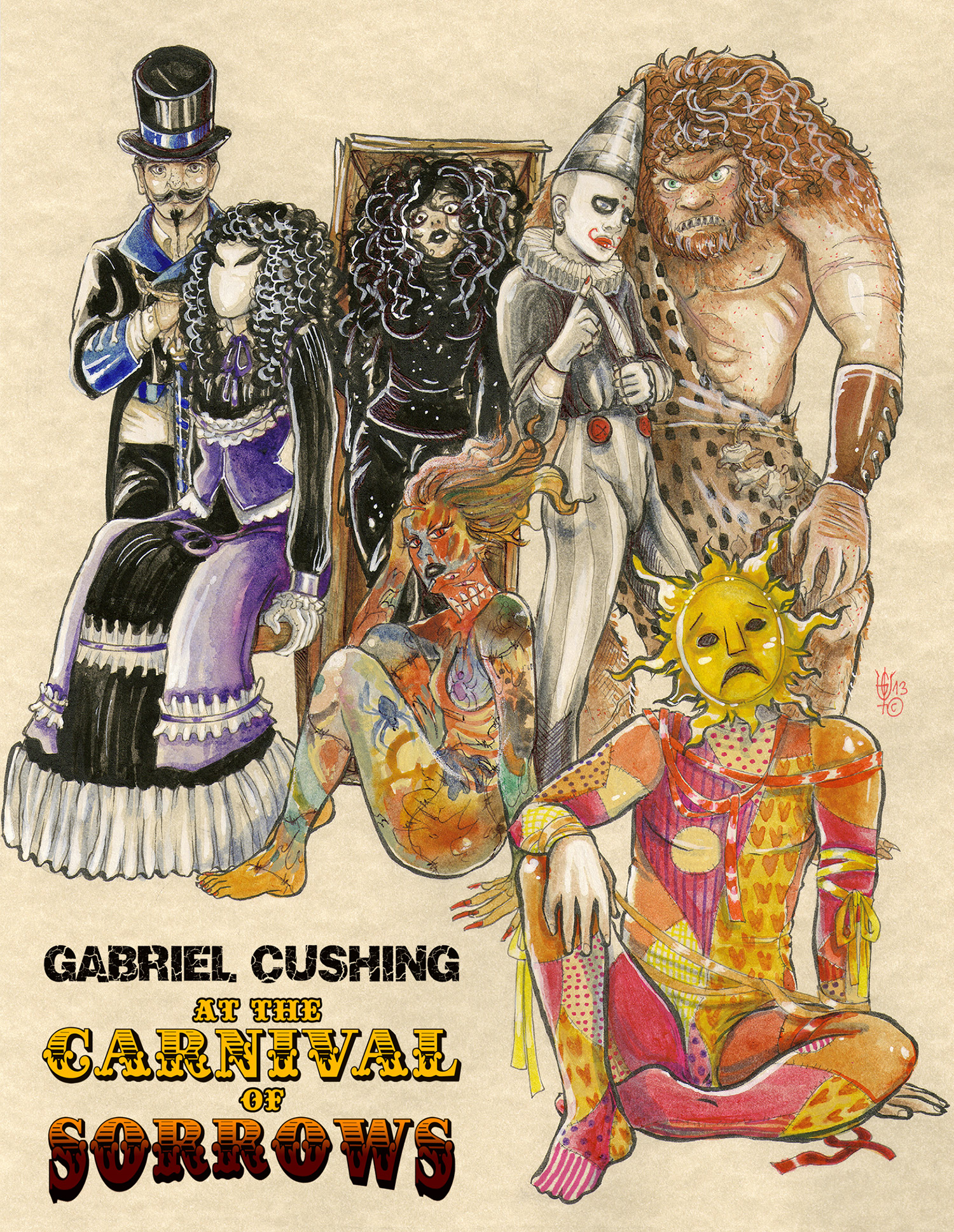 Carnival of Sorrows will be the third web series from producers The Great Escape, following on from the web series’ Gabriel Cushing vs the Zombie Vampires (October 2012) and Gabriel Cushing: Strange Encounters (Winter 2013/14), The series draws influence from classic Hammer Studios horror films and modern escapist fantasy/horror shows such as Doctor Who, Buffy the Vampire Slayer and Supernatural.

Gabriel Cushing (David Curtis) and his assistant Melanie (Sam Herbert) work to uncover the dark intentions of a cursed carnival troupe who prey on the souls of the living. Several unexplained disappearances draw them into an investigation, and, as they delve deeper, they reveal the carnival’s disturbing past and frightening portents of its future. Their every step hounded by demonic clowns, terrifying beasts, freakish living dolls and other twisted creatures, they must hurry to unlock the secret to stopping the troupe forever.

The project has had much of its budget funded via Kickstarter.

Filming will take place near Bristol between 22nd March and 27th April 2014. We are looking for actors and actresses to take on both key and supporting roles for this series, both living, dead and demonic. You should be prepared to be splashed with fake blood, potentially wear latex and effects make-up, work with special FX crew and get physical with supernatural forces from beyond the mortal coil!

Individual Character breakdowns have been included below. If you are interested please apply now, telling us which character you are potentially interested in.

Male, 20s to 30s, a violent animal in human form.  Part strong man, part lion tamer and part lion, all wrapped up in one rage filled package. Heavily muscled and, covered in scars and dirt, he wears animal skins and his face is a twisted animal form. He stalks and attacks the Carnival’s prey, a violent aggressor.

We are looking for a muscular actor. Please Note: This part involves heavy use of special effects and make-up on the face. Actor must be clean shaven.

The Man of Many Faces (Next audition Mon 16th Dec)

Male/Female, uncertain age, an acrobat and performer in the carnival. His face is always covered by an assortment of masks that reflect his moods – joy, anger, rage, sadness and terror. He is very versatile, very flexible and works as a hands on member of the carnival, grabbing, holding and ensnaring victims, but never uttering a word.

We are looking for an athletic individual with gymnastic skills, including flexibility and balance. Please wear appropriate clothing and footwear to demonstrate your physical abilities at the audition.

Any gender, aged 18 to 40 from United Kingdom.
No previous acting experience required.

Male, 40s, the father of Jenny. After suffering the recent loss of his wife in a car accident, he is despondent and uncertain how to talk to his teenage daughter. What goes unsaid between them speaks volumes, and he is her one weakness that the Carnival can exploit.

Female, mother of Jenny and wife of Mr Marwick. Mrs Marwick’s death in a car crash at the beginning of the film ignites a chain of events. Her daughter Jenny feels responsible and has fallen into a depression over the loss of her mother. The Carnival haunts Jenny with Mrs Marwick’s voice and image to drive her deeper into despair.

Female, 15/16 year old school girl, victim of the Carnival. A depressed and bullied teenager, whose own fears and pain are turned against her by the Carnival. Since her only friends Jenny and Beth left school to go to college, she has had to face her bullies alone and cannot cope. The Carnival come to her at her weakest and exploit her emotional pain in order to  claim her soul.

Female, late-40s, the Cat lady is encountered by the heroes whilst she puts posters up for her missing cat. Her pets are her only true friends and her devastation at the loss of her favourite, Vincent Chandler, is genuine. It is this sorrow that attracts the Carnival to her, and she falls victim to their malice.

Please note: This role involves the use of prosthetic effects.

Gabriel Cushing at the Carnival of Sorrows – Liana King: Female, teenager, classmate of Jenny. Liana is not deliberately unkind to Jenny, but they come from very different worlds. She is quite dismissive of Jenny’s personal issues, and her compliments tend to be back-handed. Lianna’s new friendship with Jenny’s friend Beth has driven a wedge between them which has left Jenny feeling isolated.

Female, 60s, the local librarian. Barbara has been working in the town library for years and she knows all about the area’s rich history. The story of the carnival is part of her own family history and she is vital in helping our heroes uncover the truth.

Owner of an antique store that holds a clue to the history of the Carnival of Sorrows. The look suspicious, and often crane their neck over the shelves to see what people might be up to in their store.

Any gender, aged 40 to 60 from Bristol, United Kingdom.
No previous acting experience required.

Gabriel Cushing at the Carnival of Sorrows – The Carnival: Various genders, ages and looks, there are many smaller roles for both ghostly visitations of the Carnival and its Victims. Bloody effects and gory make-up are very likely for these roles. Circus and/or gymnastic skills are also desirable.

Male, 20s-30s, a hitch-hiker walking the country lanes outside town. Not used to the kindness of others, he’s delighted when he’s picked up. However, this does not last long. Please note: Some prosthetic effects involved.

Male, 20s-30s, a driver who stops to pick up the hitch-hiker. Kind, good natured and always out to help someone in need. However, this time he gets more than he bargained for.

We always need plenty of hands on set. Whether you have specific skills or just want to help out, please get in touch. We currently have particular need of: