This is the Great Escape’s guide to things happening in the world of indie films, fiction, comics and the arts. We’ve pulled together a bunch of events for you to check out in June…

In the World of Indie Film

Edinburgh International Film Festival (17th – 28th June) – Intimate in its scale, ambitious in its scope, and fueled by pure passion for cinema in all its manifestations, the EIFF seeks to spotlight the most exciting and innovative new film talent.

Secret Cinema – The Empire Strikes Back (from 4th June) – Secret Cinema are seeking rebels from across the Earth’s territories to join the Rebel Alliance in their fight against the Galactic Empire.

This Month in Fiction

National Flash-Fiction Day – 27th June 2015 – Now in their fourth year, National Flash Fiction Day aims to celebrate all that is exciting and bold and, above all, brief in the world of flash-fiction. They’ll be highlighting the work of writers and groups currently active in flash-fiction. Check out their website for details of events. (Twitter @nationalflashfd)

Book and Writing Festivals happening this month include:

For more book fairs and literary festivals, check out literaryfestivals.co.uk.

It’s a busy month on the comic convention scene. Here are some of the events happening:

BIANCO is back. Bigger, better and more beautiful than before. Cardiff’s No Fit State Circus will be back in their home city from 12th – 27th June where you can catch BIANCO before they take the show on tour around the world.

Brite Theater Presents: Richard III (A one woman show) – Emily Carding stars as the entire cast in Richard III, touring throughout the South West and wider festival scene this summer. 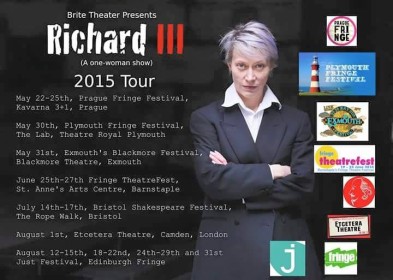