Lauren despairs over her boyfriend's geeky obsessions, meanwhile a convention guest brings a little despair of his own. 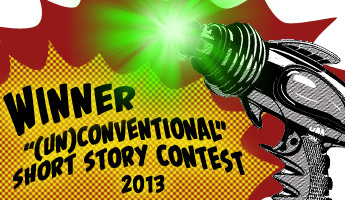 She could sense somebody towering over her.

“You’re late!” With her eyes fixed on her magazine she continued, “We’re going to start packing up in about half an hour. I’m not handing out any refunds if you can’t get your act together and get here on time.”

If she’d looked up, Lauren would have seen his dramatic entrance. Wreathed in smoke, his body seemed to hover a few inches above the ground. His webbed feet never made contact with the floor. He stood in front of her and emitted a high pitched warbling squeak. This managed to capture her attention. She looked up, covered her ears and grimaced. He fiddled with a dial attached to his belt. The ear-piercing sound gradually shifted down several octaves and became an approximation of English spoken phonetically.

“Registration was over five hours ago. You’ve missed the seminars on “Klingon Architecture” and “Cooking In Space”. But if you hurry you might be able to get an autograph off that American actor who played a cyborg warrior in the third series of the new Star Trek. Better get your money’s worth somehow before they start dismantling the stands.”

Lauren refocused on the article she was reading about liposuction after giving up on the step-by-step guide to eyebrow threading. She missed his intergalactic salute. He was greatly offended that she neither kept eye contact nor proffered the correct response. This had been laid down as mandatory intergalactic protocol at the Fourth Universal Confederation. He made his way grumpily into the large hall and proceeded to vaporise hostile alien life forms at whim. People escaping their humdrum existences by dressing up as their favourite science fiction characters were reduced to small piles of smouldering charcoal no larger than the contents of a sachet of boil in the bag rice.

Lauren saw none of this. Her focus was now on a challenging Sudoku. The din from the main hall was deafening. The ‘delegates’ as Keith called them, were probably watching some old footage of ‘Lost In Space’ that one of them had unearthed. She didn’t get it. Lauren had put up with Keith playing ‘Dungeons and Dragons’ when they were in their teens and his obsession with the films of the ‘Lord of the Rings’ in their twenties. She’d even forked out on a holiday of a lifetime to New Zealand for the pair of them. Lauren had hoped that the romantic setting would have been the perfect backdrop for a marriage proposal. Unfortunately the only questions he’d popped were regarding Gollum and Gandalf. The money Keith was spending on subsidising events like this must have been astronomical. Of course, he would never tell her how much. But there was still no ring on her finger and as her mother increasingly told her, at thirty-eight she wasn’t getting any younger. She could but dream of saving for the down payment on a house. But he seemed perfectly contented living with his parents.

She closed the main doors to block out the screams and shouts. They must be reliving some gruesome scene from one of their favourite films. Unbeknown to her, the Timekeeper had rendered all the delegates immobile and they were powerless to escape as he picked them off one by one. They were paying the price for Lauren’s bad manners. If any of them had shown the universal sign of surrender then he might have been lenient. She mistook their excruciating screams of terror for role play. Lauren found the idea of grown-ups dressing up and pretending to be a little too weird for her tastes. Keith’s dry-cleaning bills were extortionate. Still she came along and helped with the admin to keep costs down and to be near Keith. Besides, he was very handy at fixing her Ford Focus.

Her stint on reception was almost up. She put her pile of magazines in her bag and threw away the remains of her packed lunch. She wouldn’t bother waiting around for Keith. He always had a band of groupies who hung around him. Just as well she wasn’t the jealous type. They’d want to tell him about some new online fanzine. She’d go home and hopefully avoid her mother. Lauren would run a bath and wait for Keith.

He’d been in a pretty good mood as they’d had over fifty people turn up today. Tonight could be the night. As she lowered herself into the tub, she fantasised about Keith texting to ask her out for dinner that evening. They would eat at the restaurant she’d often hinted about. Keith always said it was too expensive and he bet they couldn’t cook steak and chips as well her mother. Even in her daydreams she knew that the prospect of a gipsy violinist was going too far. She imagined him pushing a small black box towards her across the table as they sipped at their postprandial liqueurs. She had several honeymoon options in mind but to be frank, she’d settle for a weekend on the Isle of Wight if it meant a wedding and escape from her mother.

As if prompted by her daughter’s thoughts, Lauren’s mother shouted up the stairs. “Weren’t you at the church hall this afternoon?”

Lauren considered not answering but that would only make her Mum come up to her.

“I just had a call from Mary. A police car’s just turned up outside the church. I hope that doesn’t mean that Keith’ll be late tonight. I want him to sort out the dodgy flush in the downstairs toilet.”

Lauren wasn’t surprised. There’d probably been a disagreement over the best costume award. Some of them took things too seriously and could get quite nasty. She reckoned the one who turned up late deserved it.

Both Lauren and her mother hoped Keith wouldn’t be much longer.