Four 150 word micro fiction stories on the theme of "escape". Winner and runners up from our micro fiction vs poetry writing competition. 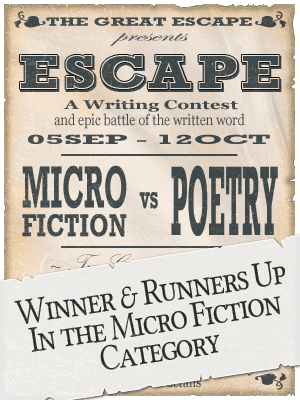 The following collection of micro fiction stories are the winners and runners up from our “Escape” micro fiction vs poetry contest (Sept-Oct 2012).  Competition entrants were asked to write 150 words with the theme of “escape”.

For more details about our current and past contests, visit our Competitions Page.

The winners from the poetry category will be published on Monday 29th October.

The Incident of the Crow through the Window

A crow, it’s foot trapped in the window ledge, can’t get away.

It flaps tired wings to pick itself up and pulls away, then failing, drops, hitting the side of the building. It tries several more times. This is a last struggle for life: such an unnecessary battle for a poor bird.

She alone gasps as the bird once again falls, violently hitting the wall. She watches as it bashes and flails, wishing she could save it, hoping for a quick death.

The bus she rides rolls along and she looks back.

What was a crow is now not one; it is only a black plastic bag caught in the wind.

She lets out her breath, in relief. But the horrible feeling of the bird trapped on the balcony remains. She turns away, closes her eyes, and in her mind she lets it escape.

Amelia-Rose told lie after lie. Fibs are her escape from her harsh home life, her counsellor said. She’s creative, imaginative, her teacher said. She’s a lying little bitch like her mother, her father said. Her mother couldn’t comment, she’d disappeared and hadn’t been seen for weeks.

Amelia-Rose told her six year old peers that she knew a magical place in the woods and that if you climbed up the biggest hill, you could actually fly from the top. She’d done it herself only yesterday, she said, so their short legs followed her up. Nobody wanted to go first. Amelia-Rose said that she couldn’t do it because the magic only worked once.

They agreed to jump at the same time, all holding hands in a row. Amelia-Rose heard their screams. She peeked through her hand at their broken bodies on the rocks below. Her mother could look after them now.

“Perhaps you should let somebody else make the speech, Tony? That’s your fourth drink.”

“Fifth actually. But who’s counting? You evidently. Time for a top up. Fancy another?”

Not waiting for a reply, he staggered up to the bar and returned with another double. He gave his date her orange-juice.

“You only invited me so I could be the designated driver.”

Finally, it was Tony’s turn. After spilling his drink and stumbling over the first few sentences he overheard the bridegroom’s mother say, “the best man’s drunk.”

Within two minutes he succinctly assassinated the characters of the happy couple, questioning his parentage and her virtues. Tony raised his glass. “To my ex-girlfriend and ex-best friend. They deserve each other.”

“I paid the barman to make it look like large vodkas. Been on water all afternoon. Let’s celebrate.”

I enter. That’s it, I’m stuck here, locked away. I sit down, looking around. I see a window, and more importantly I can see an opening. I run and leap for it but I’m too short, a fact which amuses the tall, French man imprisoning me. He makes a joke at my expense, probably something like “short arse”. I guess; I don’t know any French. Others laugh. To think these people come here of their own accord. They must be mental.

I ask my captor if I can go to the loo, I’m thinking I can overpower my escort and run. “Non,” he replies. My plan foiled, I’ll have to sit it out. It drags. My captor blabs at me in French. I attempt sleep and plan my escape.

Ding-a-ling-a-ling-a-ding. I get up and leave. “That great escape plan will have to be saved for next lesson,” I think.