All DCI Fraikin wants is a quiet Christmas, but someone has other plans. Winner of our Christmas short story contest. 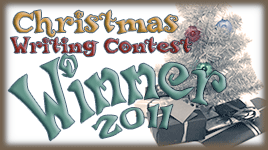 ‘I know it’s home time,’ DS Reid said at noon, his hands full of tinsel. ‘But we thought we’d stay around a little longer. Keep you company. We don’t like the thought of you working the rest of Christmas Day all on your own, in the office.’

‘That’s a pity,’ DCI Fraikin replied. ‘Spending Christmas Day alone was exactly what I had planned. The last thing I want around here is a party.’

But any further discussion was interrupted when the call came through. Before you could say ‘twelve drummers drumming’ Fraikin and the whole team were heading for the crime scene.

At least now there’s something to wipe the festive grins off their faces, Fraikin thought, getting out of the car. A package: gift-wrapped in red paper, dotted with white stencilled Santas and green outlines of holly leaves. A package that was five-feet-eight long with two arms, two legs and a head. It was stretched out in the snow-covered alleyway, finished off with a bow of shiny gold ribbon.

Fraikin pulled on his latex gloves and knelt in the snow to touch the gift-wrapped body.

‘Dead?’ DS Reid asked, hanging back with the rest of the team.

There was a tag bearing a cartoon reindeer’s face, hanging from the golden bow. Fraikin flipped it and sighed, his breath hanging like smoke in the cold air. ‘That’s all I need.’

‘To DCI Fraikin,’ he read out loud. ‘Merry Christmas, from Saint Nick.’ Delivered, no doubt, by some psycho with a grudge against him. Or would this be the first of many gifts left by a new festive serial killer? ‘Christmas always brings out the best in people, doesn’t it, Reid?’

‘Yes, Sir,’ said Reid, brushing at some flecks of tinsel still clinging to his jacket.

‘Well, better get the damned thing open,’ Fraikin said. The sooner we deal with this, the sooner they’ll all go home and leave me in peace, he thought. He undid the bow and began picking at the sticky tape with his gloved fingers. ‘If I’ve got to open one present today,’ he said, turning to Reid and the others, ‘it might as well be one that puts you off your Christmas dinners.’

He took a deep breath and peeled back the tape slowly, starting at the head, waiting for the display of pallid flesh that would follow. Reid and the others gathered around, whispering, like shepherds at the manger. The tape snagged, ripping the paper and exposing the face.

‘What the-’ Fraikin gasped. The furrowed brow, double chin and protruding bottom lip were all there. He was staring at himself, replicated in smooth, crafted ice. A whole frozen sculpture, made into a perfect scowling copy of him.

‘Merry Christmas, Sir,’ said DS Reid, laughing, ‘from all of us on the team.’ A squeal of party whistles and loud greetings followed.

Fraikin felt an unwelcome smile tugging at the corners of his mouth. ‘Reid!’ he yelled, getting to his feet. ‘Just you wait-’