An Interview With Matt Warner, creator of Dorian and Drama 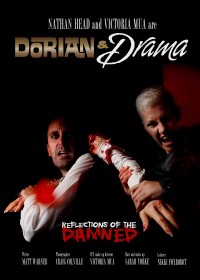 Hellbound Media is a name you may have seen pop up on the site quite frequently throughout TGE’s life, and that’s not surprising. Not only did they provide several early comic submissions to the site (‘The Monster Under The Bed‘ and the ‘Kiss Me Deadly’ taster), but they are the creators behind our current web-comic ‘Faith Healers: The Flesh Angel‘ which returned to the site last month.

Hellbound Media is well known for its illustrated horror comics, but now they are venturing out into the realm of the photo-novella with new comic series Dorian and Drama.

Their first outing, Reflections of the Damned, is the story of magician Dorian D’Arcane’s big comeback show after his much-publicised fall from grace and how it goes horribly wrong. It takes place at Plas Blodwyn, a former asylum where the evil doctor tortured the inmates. There images are captured in an antique camera but, thanks to Dorian, they don’t stay captured for long.

Recently, we had the pleasure of interviewing creator Matt Warner to talk about the series, as well as getting a sneak peek video from behind the scenes with Donna Lloyd:

Chrissey Harrison: So Matt, Dorian and Drama is a photo-comic, tell us a bit more about where the idea came from to use photography in a comic? Who was your photographer/how did you meet?

Matt Warner: The idea first came about at a shoot for a possible photocover for the Hellbound Media comic Dawn After Dark: Kiss Me Deadly. While the shoot was taking place I got chatting with Victoria Mua who was doing the make up on the day. She loved the comic and showed me some of the horror special effects she had done, which were brilliant.  It became clear that it was an opportunity to do something special.

It took about a year for the other pieces to fall into place. I met photographer Craig Colville through my work as a regional newspaper editor. He was keen to do something different and after a few brainstorming sessions we had a clearer idea of what we wanted to do.

CH: You found some amazing locations to shoot in, what was that like?

MW: It took us quite a while to track down the right location. From the beginning we wanted to shoot in North Wales but after scouting locations like Ruthin Gaol and some private schools it became clear that wouldn’t be practical for us.

In the end, we were tipped off about Antwerp Mansion in Manchester. The building has been many things in its life but now is a nightclub where a lot of artistic projects take place. Kris Extance at the Mansion was very enthusiastic about our project from day one and it turned out to be the perfect backdrop for our story.  Graffiti artists were working on the walls throughout are shoot, totally changing their appearance, meaning we could use the same space for different locations.

Due to the nature of the mansion it meant that we sometimes had to be creative when working around band practices and gigs.

CH: Who worked on the special effects in your shoot?

MW: The make up effects were all done by Victoria Mua, who also plays Drama McKenzie. Most of the effects were planned in advance, like the torn off arms and the head in the fridge. But Victoria is also great at doing things on the fly. The scene where we gouge out the eyes of a chracter played by Hannah Hunter, a beauty queen and model who had just won the title of Face of the World, Victoria managed to create the effect in very little time. It ended up becoming one of the most striking sequences in the comic.

Victoria was assisted by Sarah Yorke, who also did the hair for the shoots. She added a whole extra dimension of glamour, particularly in the scenes with the D’Arcane Dolls.

All of the light effects in the comic’s finale were done in camera using shutter drag and long exposures. There are a few behind the scenes pictures on our blog where you can see people moving lights. We even had frisbees decorated with fairy lights which produced some interesting images.

CH: What was your favourite part of the shoot? Do you have a favourite image?

MW: My favourite shoot was the scenes with Mummy’s Girl. Victoria had made herself up to look like the character on the morning of the shoot, and the end result was horrific. We got quite a lot of double takes on the drive from Liverpool to Manchester.

My favourite image in the comic is the one where Dorian opens his box of supposed magical items. It was always scripted that Dorian would be illuminated from a light within the box. When it came to shooting the image it took a lot of trial and error to make it work. A piece of card eventually saved the day.

CH: Was there a lot of material you didn’t use? Do you have any plans for deleted scenes?

MW: There was one scene that just didn’t fit in the comic, it stopped the story from getting going. It was a shame as it featured one of the most elaborate make up effects. We are now planning to use these images to make an exclusive Dorian and Drama webcomic.

CH: What’s next for Dorian D’Aarcane and Drama McKenzie?

MW: We are starting shooting Dorian and Drama 2 this month in Chester. The title is still under wraps but it won’t be Curse of the Nymphophibian which is tasted at the end of Reflections of the Damned.

We do hope bring the Nymphophibian to life in the future either as a comic or a short film.

Thanks to Matt Warner for the interview. Dorian and Drama: Reflections of the Damned can be purchased from the Hellbound Media website hellboundmedia.co.uk or via Comicsy.

They can also be found on the Hellbound Media table at various comic conventions up and down the country. Check facebook.com/hellboundmedia and facebook.com/doriananddramaproject for more details.