The Carnival has come to town!

Hello again, especially you wonderful people who supported us on Kickstarter. We may have been quiet for a while, but rest assured that since we’ve last posted a huge amount of work has gone on about our latest production, Gabriel Cushing at the Carnival of Sorrows – so much so that we are actually now through pre-production and are now filming! So let’s recap what’s happened since we last spoke…

Between September and March, we ran three full casting calls, one recall session and a few one-on-one casting sessions. Thanks to everyone who applied for a role, but in the end we only had a certain number of roles to fill – so congratulations to all! (If you are a Kickstarter backer, check out the updates on the Carnival of Sorrows page for more details about the castings!)

There have been several rewrites to the script since the Kickstarter began all those months ago, including a beautiful day in August where the entire script was taken to pieces, inspected and rebuilt to make sure we had a script better than anything we’ve ever had before. Honestly, everyone loves it and we hope we can do a good job to convert this passion to the screen.

A huge amount of planning has been happening behind the scenes, with shot lists, breakdowns, storyboards contracts, insurance paperwork, receipts and endless department plans raining down on us like the British weather.

To say this is the most complex production we’ve ever done is an understatement – this really is the biggest shoot we have ever done!

We’ve also acquired several new crew members (including several new faces to our make-up, sound, and production departments)! Sadly, some previously engaged people have found themselves unavailable, but luckily we’ve managed to work around the issues faced and come out the other side bright and smiling!

We’ve scouted, located, locked-in and bolted shut many of the locations required for the shoot, with a small number of locations for later in the shoot still to get.

As we said at the start, we actually began filming this week! Last Monday provided 2 and a half scenes completed – strangely, due to the way production has panned out, the first scene filmed was actually the last scene in the film.

We hope to be bringing you regular updates from the set along with behind-the-scenes photos (avoiding spoilers, of course!), inside news, cast and crew updates, and much more … but only for backers! Everyone else – you’ll get less frequent updates, but we’ll keep you updated on exciting news too big to hide!

So stay tuned for more from the Carnival of Sorrows! 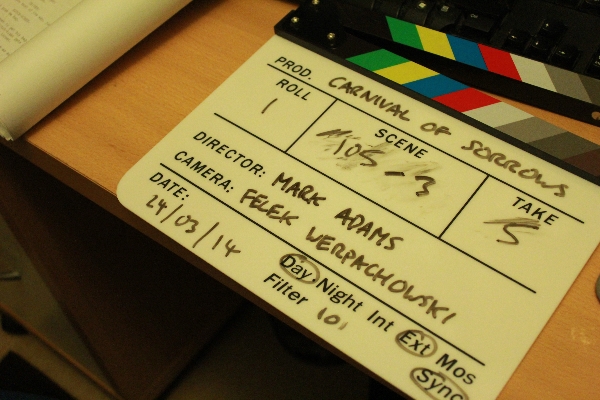