A Great Escape shout out to Desert Bus for Hope

Great Escape founders Chrissey and Rich have long been fans of Canadian comedy troop LoadingReadyRun and they are a huge inspiration for us.

Every year for the last four years they have organised what has become the internet’s biggest live fund raising event; Desert Bus for Hope.

The team play the worst video game ever to be nearly released. Desert Bus is a mini game on the never released Penn & Teller Smoke and Mirrors for the Sega CD. The player drives a bus from Tuscon, Arizona to Las Vegas across the intervening featureless desert in real time. The trip takes eight hours after which you get one point, turn round and start the return journey. The road is straight, but the bus lists to the right and if you don’t play constantly you crash and have to start again. 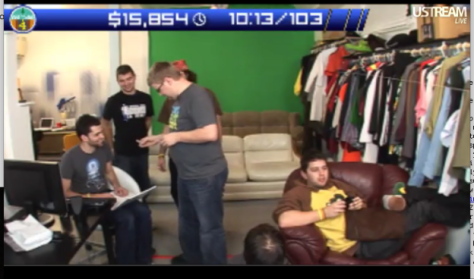 The team play continuously for as long as their supporters pay them to and currently the time for Desert Bus 5 is 113 hours. Last year the team bused for over six days.

The whole marathon is broadcast over the internet and while the bus rolls along the highway the group take on challenges, run auctions and competitions and interview special guests for donations.

All of the donations go to Child’s Play, a charity dedicated to providing games and toys to children in hospitals all over the world, who otherwise don’t get the chance to play like normal children.

It’s a wonderful cause and an addictive, entertaining event that is hard to turn away from. Go watch, get addicted and get involved! Send them your challenges, bid on the auctions and give whatever you can for the children and to keep the bus on the road.

After Desert Bus 4, the team made a music video based on the game called Tuscon or Bust: